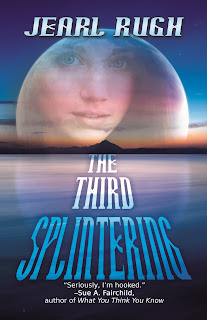 "Seriously, I'm hooked." Sue A. Fairchild, Author of What You Think You Know

Zoe has spent her fifteen years being nothing but average. But when Silone and three other mystical men appear, she unearths a forgotten truth lying dormant since infancy. More freak than anything normal, she’s a half-human, half-extraterrestrial shape-shifter.

Certain they’ve abducted her parents, now, in a relentless pursuit, they hunt her. On the run, even with her new reality wrenching every thought and emotion, she manages to reach an unfathomable decision. To locate the otherworldly place her parents must be held, she needs to surrender to her pursuers. But to rescue those she cares about, the one thing she requires most—warrior’s grit—is as elusive as her hope of success. Now, ravaged by despair, dread, and self-doubt, she confronts the destiny from which she might never return.

More info at www.jearlrugh.com.
Posted by Unknown at 2:38 PM No comments: 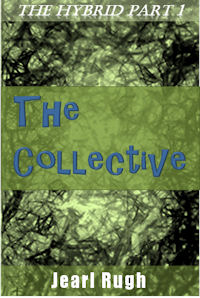 The Collective
Be part of the Conversation


All Seneca wants when she bounces out her window near midnight is to find Kirk waiting with her first kiss ready on his lips. After her feet light in the backyard, however, the kiss will have to wait as she’s thrust into a corporeal world only her brother’s graphic novels could imagine.


When she witnesses a team of “men” abduct her family and then discovers she’s a hybrid human/shape-shifter, she faces a choice: if she hides until the shifters give up hunting for her, she may never find her family, but, if she surrenders to the aliens, she may not possess the warrior grit to rescue those she loves.
Just completed and ready for your feedback, the first few chapters of The Collective is available for your review at WriteOn or BookCountry. To be included in my mailing list, which will give periodic updates on the road to publication, sign up for my Newsletter at jearlrugh.com.
Posted by Unknown at 5:20 PM No comments:

The Keepsake by Tess Gerritsen
My rating: 4 of 5 stars

“The Keepsake” begins slow, not as fast paced as I prefer, but then, as I read on, the tempo picked up. After all, how engaging is a mummy, unless you’re an archeologist. Speaking of which, there is a whole cadre of archeologists who, at times, are both victims and suspects.

The story begins with Maura observing an examination of a mummy thought to be centuries old, but that’s as far as I can take the plot without revealing too much.

As the story built momentum, I found I needed to read just one more page, one more chapter. More than just suspense and crime solving, though, there is a lot of mystery here unwrapped layer upon layer. The “who-done-it” is clever and is left to the end. For those who are into the Rizzoli and Isles cast of characters, there are some twists you might not expect, which makes for good reading.


View all my reviews
Posted by Unknown at 3:39 PM No comments:

If you're in the mood for a laugh, look no further. These writers have adlib dialed in.

Natchez Burning by Greg Iles
My rating: 4 of 5 stars

As always, Greg Iles delivers with more than just a punch in this the fourth in the Penn Cage series and first in his epic trilogy about the sins, the sinners and the saints of the civil rights war in the 1960's south.

When Penn's father, Dr. Tom Cage, is accused of murdering the nurse who worked by his side in the days the KKK and a secret murderous cult known as the Double Eagles had more power and influence than J. Edgar Hoover and his army of FBI agents, secrets thought to be long buried ooze to the surface. Penn, devoted to his aging and ill father, disregards the past ghosts, though, now forty years in the rearview, to save his father from a corrupt DA and the hit the Double Eagles put out on Tom. But in the course of Penn's frantic efforts, he not only comes in conflict with the horrific past and those who will stop at nothing to keep their role hidden, but also his fiancé, the Noble Prize winning editor of the local newspaper. To get the jump on the story, she wants to reveal the web of terrorists who murdered several black men in the mid '60s before Tom, who has gone to ground, can be found.

Iles is a master of the thriller. "Edge of your seat" and "thrill ride" doesn't begin to describe this read. It's more like clawing at the walls while your fingernails rip and tear from their roots. I only have two minor critiques and is why the four star rating. 1) This is a Penn Cage novel and Penn is hardly a character for the first third of the book. 2) Iles is a bit repetitive on historic details. I found myself saying, "I already know that," when he would describe an event through a new characters eyes.

But don't let that get in the way of the read. If you love great thrillers, I guarantee that once you start reading "Natchez Burning" you'll find it almost impossible to put down.

View all my reviews
Posted by Unknown at 2:44 PM No comments:

Review: A Dance with Dragons

A Dance with Dragons by George R.R. Martin
My rating: 5 of 5 stars

Martin continues to be the master of suspension of disbelief in this his fifth edition to the fantasy novel series "Song of Ice and Fire Ice." He moves from point of view to point of view, giving the reader just enough detail to keep the pages turning and the plot weaving (not maundering or at a glacial creep) ever forward. The story is vivid in its beauty, bloody in its execution, majestic in its passion, and humiliating in its retribution. He crafts confrontations from which the characters see no way out and, yes, from time to time, they meet their end of days. Yet, at other times there's just another cliffhanger for this book ... or maybe not. In fact, there are so many cliffhangers by the end of "A Dance with Dragons" my fingernails are already fractured trying to hold on for book six.

View all my reviews
Posted by Unknown at 1:38 PM No comments: